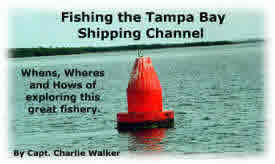 Tampa Bay is not only the largest estuary in Florida, but it's also the Gulf coast's most diverse area in terms of underwater topography. The bay itself averages seven to twelve feet deep over most of its area, while the ship's channel is dredged out to a controlling depth of forty-eight feet. All of the dredging for the channel has cut into solid limestone on both sides and in the bottom. This creates some great structure for all manner of gamefish year round.

In our area of the Gulf, the bottom drops off slowly as you head offshore, averaging only four feet of depth per mile of travel. At nine miles offshore the depth is approximately thirty-six feet, and at eighteen miles, it is only sixty feet deep. Most of the productive drop-offs in the Gulf in our area are only one to three-

foot drops. The ships channel edges have drops that can be as much as twenty feet deeper that the surrounding bottom outside the channel. There are also many undercuts in the walls of the channel that look like caves, where the dredges either cut too deep, dynamited boulders out or just opened up pockets that were naturally formed in the limestone. These sections are generally the best areas of all to fish. 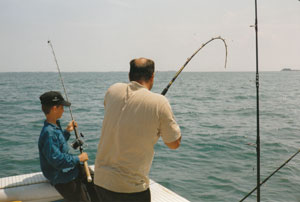 Since the ship's channel runs offshore twenty miles, you can well imagine that there are many, many miles of drop-offs you can prospect along both the north and the south sides of the channel. This does not include the inshore run of the channel, which is twenty-five miles from Egmont Key to the main branch of the channel in the upper bay. Also there are three channels that branch off the main channel with good rock edges as well. So now you have approximately forty-five miles of main channel to work - both sides, of course, with three separate branches. There are also the miles and miles of fishing water in the mouths of the Little Manatee river, the Manatee river, and the Southwest Pass, which is a shallower entrance to Tampa Bay on the south side of Egmont Key.

If you really want to try fishing all of this, be sure that you have one or two lifetimes available, because everything changes not only with the seasons, but also with the passing of years. Most of the people that I know that consistently fish the channel will probably not cover more than ten miles of it on a regular basis. Like all of us, they find some favorite spots and stick to those areas most of the time, with the seasonal weather changes simply moving them inshore or offshore a few miles from their favorite holes.

If you really want to have your mind boggled, go out and buy a chart of Tampa Bay and sit down to study it for potential fishing spots. I won't even talk here about the smaller channels into the nine major ports that we have around the bay area, or the fishing inside these ports, they would simply add another twenty or thirty miles of prospecting to your already full two lifetimes of fishing. Of course, nowhere in this article will we discuss flats fishing - that would be another several hundred square miles to consider.

Down to the nitty-gritty. The spring and fall of the year are my favorite times to fish. Kingfish are migrating past our area at these times of year. The prime dates are April 15th (arrrgh...IRS) and Thanksgiving. These have been the finest times for fishing kings over the years. If you want to plan your vacation for smoker kingfish, this is the time to pick to do it. The mouth of Tampa Bay, at Egmont Key, is the most consistent area to get a chance at some real smokers in the 35 pound and up range. I like to fish the Southwest for the last hour of the incoming tide and then move to the north end of the island for the first hour of the outgoing.

This is live bait fishing at its best. I like to work from an anchored boat, using a lot of chum and the largest live baits that we can catch. The most common bait is full-grown threadfin herring, six to seven inches long, but mullet, ladyfish, trout, blue runners, and scaled sardines are also good. The bigger the bait the better. A mullet in the two to five pound

range is great, as well as the biggest ladyfish and trout that you can get. Another great bait, often overlooked because it dies quickly if overcrowded in the well, is a large menhaden - we call them shad.

We float the baits out behind the boat on a pair of hooks, 4/0 and 5/0 with five feet of #4 coffee colored wire leader, swimming freely, with a float just above the leader to keep the bait from finding the bottom. Rods are left in the rod holders and not picked up until the fish finishes his first run. The rod holder is the best fisherman on the boat on any day. This is my favorite kind of fishing, because many times we will have two or three big fish on at the same time - and what a circus that is.

Year round, the channel edges are home to many species of fish: Spanish mackerel, mangrove snapper, trigger fish, grouper, grunts, cobia, and shark depending on the season. Another good thing about fishing the channel is that you can still fish when the weather is nasty, so long as the wind is not too strong out of the north or south. Most of our winds in this area prevail from the east or west, so with the exception of strong fronts that move through, we can usually fish some part of the channel even on days that we can't get offshore.

Some thoughts on safety

The main safety considerations are the ships and barges that ply the channel twenty-four hours a day. Never forget that they have the right of way under all circumstances. You should never think that just because you are anchored outside the markers they will not hit you. This is a heavily used commercial channel and it is illegal to anchor in the channel or in any way impede the safe movement of the ships and tugs that are using it. Even when anchored clearly outside of the channel, you should be ready to move on a moment's notice. Accidents happen even on the best-run ships, and believe me, you don't want a freighter that has had a steering failure or other catastrophe to run over you. So always watch what is happening all around your boat when fishing on or near the channel.

I mentioned before the undercuts in the channel walls. These are the best areas for grouper and

mangrove snapper. There are quite a few of these areas along the channel, and the fish seem to migrate up and down the channel depending on the water temperature and availability of baitfish. When fishing these undercuts, or even along what looks like straight up and down drop-offs, the suggested tackle is eighty-pound line on the reel and up to one hundred twenty pounds for the leader. Sometimes stainless cable is used for the leader material when the grouper are particularly aggressive and large. If smaller sized line is used on the reel, it will allow too much stretch from the rod to the bait, and when a big grouper hits, he will take you under a rock immediately, usually resulting in a cut-off.

Even with the eighty-pound line, the grouper still has the upper hand, surprising the complacent fisherman and getting under his rock before the angler can react. This is why the extra-heavy leader is needed. If your leader is not cut, most of the time the fish can be persuaded out from under his rock. You can accomplish this either by brute force or by loosening up your line to let him think the pressure is off, and he will often swim out on his own.

For mangrove snapper, trigger fish and grunts, the areas to fish are the same as for grouper, but usually these species will be on or near the top of the channel edge, or at least above the undercuts. Tackle can be scaled down to any weight the angler prefers since these guys don't run for a hole when they strike. The snappers generally run from one to five pounders, but I have seen a few seven and eight pounders come out of the channel.

All of the above: grouper, snapper, triggers, etc. can be caught using using traditional bottom fishing tackle and techniques. There is another way to fish the channel walls that we have used for years - trolling with planers or downriggers. In years past we used this technique for "prospecting" purposes, just as we did offshore. We would troll with large plugs fished as close to the ledges as we could run without losing the planer or the plug to the rocks (and brother, we did lose a lot of them). When a big grouper was caught, we would mark the spot, anchor up, and fish with rod and reel.

Many anglers today use the deep trolling method as their primary fishing tool and don't bother to anchor over a productive spot. With the increasing popularity of downriggers today, this is a very productive and fun way to fish if you like to keep the boat moving all the time. For more information on deep trolling methods, see the article "Dig Deep!", elsewhere on the website.

I don't want to forget the biggest fish attractor of them all. The old Skyway Bridge fishing piers on both the 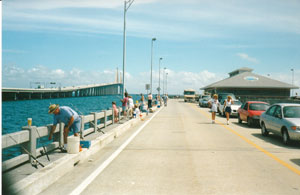 north and the south side of the bay. The south side is billed as the longest fishing pier in the world. You can drive your car right up to your fishing spot on both sides of the bridge and there are facilities and bait houses on both ends. The pier is four lanes of bridge area 3/4 miles long on the north and 1 1/2 miles long on the south. Artificial reefs line both sides of the piers, east and west, built from the rubble of the center span that was removed after the new Skyway Bridge was built. The south pier has its own resident twelve-foot shark that has been keeping everyone excited for the past few months. If we're lucky, no one will take him out of the water. I doubt if there is any fishing in the world with more diversity and potential for excitement than the Skyway Bridge area.

If you are not ready to drop everything and come to the Tampa Bay area yet, then either you're dead, chained to your job, an incurable couch potato, or flat broke. If you are not any of the above, then get off your duff and come on down. You'll catch darn few kingfish sitting in the living room.