This article is produced in cooperation with Magellan Systems Corporation, 960 Overland Court, San Dimas, CA 91773. Without this collaboration, this article might have gone on forever to try to explain the magic of satellite positioning, encrypting reasoning and communications. Their significant contributions in this venture are greatly appreciated.

The Global Positioning System (GPS) is a constellation of 24 satellites that orbit the earth twice a day, transmitting precise time and positioning information to anywhere on the globe, 24 hours a day. The system was designed and deployed by the U S Department of Defense to provide continuous, worldwide position and navigation data for the use of the United States and allied military forces. 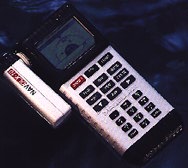 Civilian Use of the System:

GPS's broad commercial applications were recognized early in the system's development, and it was decided to allow free access to GPS signals with certain constraints applied.

Each GPS satellite broadcasts two signals, PPS (Precise Positioning Service) and SPS (Standard Positioning Service). The PPS signal is an encrypted military-access code. The SPS signal is an unencrypted, spread-spectrum signal broadcast at 1575.42 MHz. Unlike signals from land-based navigation systems, the SPS signal is virtually resistant to multipath and night-time interference, and is unaffected by weather and electrical noise.

The SPS signal contains two types of orbit data, almanac and ephemeris. Almanac data contains the health and approximate location of every satellite in the system. A GPS receiver collects almanac data from any available satellite, then uses it to locate the satellites that should be visible at the receiver's location. Ephemeris data contains the precise orbital parameters of a specific satellite.

In general, an SPS receiver can provide position information with an error of less than 25 meters, and velocity information with an error of less that 5 meters per second. It is good to mention here that most "Chartmate" types are accurate only to 15 meters. It is because the system is so accurate, the US Government has activated what is known as Selective Availability (SA) to maintain optimum military effectiveness. Selective availability inserts random errors into the timing and ephemeris information broadcast by the satellites, which reduces GPS SPS code accuracy to between 25 and 100 meters.

For many applications, 100 meter accuracy is more than acceptable. For applications that require much greater accuracy, the effects of SA and environmentally produced errors can be overcome by using a technique called Differential GPS, which increases overall accuracy.

**For another discussion on GPS versus LORAN-C accuracy, click here .**

Differential GPS (DGPS) uses a GPS receiver at a fixed point whose position is known with submeter accuracy. This is the control unit. The receiver collects data from all visible satellites and computes predicted satellite ranges, which are compared with actual ranges. The difference is the satellite range error, which is then converted to correction signals for use by a roving receiver. The roving receiver would be to one on the system users boat.

It is assumed that this correction will be the same for other GPS receivers that in the same area and are using the same satellites for positioning. If the correction is communicated to other receivers in the area, usually by a beacon on the same site, the range error can be removed from satellite signals and precise fixes calculated by these receivers. It should be noted that not all data errors can be corrected in this way. Errors that are caused by receiver noise (which is inherent in any GPS receiver) and multipath problems cannot be eliminated with differential equipment. Multipath errors occur when the receiver's antenna "sees" the reflections of signals that have bounced off of surrounding objects.

The Global Positioning System is monitored and controlled by the US Air Force, which is responsible for updating and maintaining exact satellite position and signal data accuracy. It is also responsible for performing maintenance on the satellites, which may require a given satellite be taken "off-line." Since the system is subject to periodic updates and changes, the almanac data broadcast by the satellites is current only for a limited time, generally about six (6) months.

The needs of the worldwide civil GPS user community are served by the Civil GPS Information Center (GPSIC) located in Virginia. The GPSIC is operated and maintained by the United States Coast Guard for the US Department of Transportation. Its primary function is to provide information on the Global Positioning System and satellite status and to serve as a point of contact. The GPSIC has general GPS literature available free upon request. The Center also maintains up-to-date almanac data and Operational Advisory Broadcasts containing current constellation status and planned satellite outages.

There are three ways to quickly obtain current advisories and almanac data from the GPSIC and they are:

There are other sources for GPS information, ranging from free, governmentally produced literature to purchased professional literature and seminars. The geography department of your local college or the local office of the National Geodetic Survey may also be able to offer assistance.

A map datum is a mathematical description of the earth or a part of the earth. It is used to correctly assign real-world coordinates to points on a map or a chart. Because the earth has a very irregular shape, taking accurate measurements of doing calculations on the earth's true surface is very difficult and complicated. A mathematically regular shape is much easier to deal with, if the shape accurately represents the earth's true shape. The most representative shape is an ellipsoid.

A map datum is a mathematical description of the earth or a part of the earth, and is based on the ellipsoid or the arc of an ellipsoid that most closely represents the area being described. In addition, the datum is centered at a specific location know as the datum origin. A datum may describe a small part of the earth, such as WGS84, depending on which ellipsoid or ellipsoidal arc is selected and where the datum origin is. Since datums use different ellipsoids and have different origins, the Latitude and Longitude coordinates of the same position differs from one datum to another. The difference may be slight or great, depending on the datum involved, but will affect the apparent accuracy of the positioning information provided by a GPS receiver.

Most GPS's and Chartmate type equipment use the WGS84 datum, which is the model of the earth that is the closest possible average of the planet as a whole. Which datum your charts are based on is usually found in the chart's legend. Occasionally, electronic charts do not include this information, which means that position coordinates determined with the Chartmate type equipment may not appear to agree with coordinates determined from a printed chart. When the variations are large it will be necessary to insert correction factors into the equipment. These correction factors will then be applied to position fixes before they are displayed.

It is important to remember and understand that aside from all of great help one gets from all of the electronic navigational equipment, it is still the final responsibility of the boat driver to know where he or she really is and where it is that he or she is going and how to get there. It is important to navigate with the assumptions that the electrical system on any boat may just decide to take a vacation too. There is little reason to rely on bargain equipment - check out what is available and purchase as much for features and brand reputation as for cost of the equipment. A few extra bucks will buy the best and the best does a better job.

Just for the record, a meter is just a bit longer than a yard which is three (3) feet. The following will allow you to calculate the meter explanations above to better understand what you might expect to encounter if your installation is sterile, properly isolated, grounded and your antenna is not impeded with other electronic interference (other equipment on the same boat and in the proximity of the DGPS and GPS antennas.

For sources of GPS and Loran-C coordinates for fishing, diving, wrecks and reefs check out Weak Industries in the Southern Charm Catalog.