in the Tampa Bay Area

There are almost as many sharks in the Gulf of Mexico as there are species of sharks in the Atlantic. As a matter of fact, somewhere in the Gulf, there has probably been caught at least one of every shark that lives in the Atlantic, north of the equator. There are stories, and in some cases pictures of great white sharks caught in the Gulf. Granted, only two that I have heard about in the last 30 years, but whos to say there havent been more lost whites. 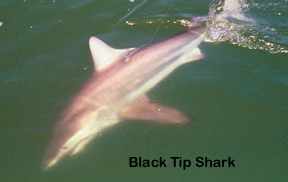 There are several species that are caught regularly in our area of the Gulf, probably the most common of which is the black tip shark.  Black tips are generally caught in the summer time in the bay area in shallow water, frequently in the same shallow water that is frequented by wade fishermen. I have seen them in very large schools on the grass flats of the lower bay and on the beaches even inside the swimming buoys. Most of them are the little guys, two to four feet long, but there are larger ones taken regularly on the hard bottom areas in 15 to 60 feet of water.

Most of the sharks that are in our area migrate along with their preferred food supplies. When the tarpon begin arriving in the area, the large hammerhead sharks closely follow them. As we begin to see stingrays in the shallow water, the catches and sightings of black tips, white tips, sand (top of page), bull, scalloped hammerheads, and tiger sharks. 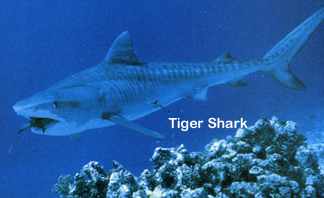 increases as well. Nurse sharks can be found on our hard bottom areas almost year round, but they seem to prefer the warmer water of spring through fall, so the sightings of these fish on the hard bottom areas increases at the same time as the other sharks.

during the 70's and 80's, NMFS helped the commercial sector develop a market for what they first called an underutilized (and later redefined as a severely over-fished) group of fish in the sharks. Markets were developed in the orient for the fins and it was a common practice for the long-liners to cut the fins off the sharks and discard the fish, some of which were still alive. Then through most of the US the practice of finning was made illegal and

the fishermen were required to bring in enough sharks to account for the amount of fins they sold. It only took a few years for the long-liners to severely deplete the shark population and the NMFS scientists to realize that sharks reproduce too slowly to tolerate the massive loss of population that long line fishing produced, but since they had helped develop this industry, they couldnt just close it down, so long lining of sharks is still allowed in the Gulf and the shark populations continue to dwindle.