Ever since the Florida voters decided by a 72% majority vote to amend our state constitution to eliminate gill nets in state waters, the inshore fishing has been improving. The first and most noticeable stock improvement was speckled trout. Almost immediately anglers began catching more and more trout in Tampa Bay and the surrounding waters of the ICW. Prior to the net ban, the gill nets were straining almost all the sea life out of our estuary on a daily basis. According to Ray Guess of the Florida Marine Patrol, now deceased, there were approximately 1,800 gill nets registered in Pinellas County in the late 70s. When a license fee of $250.00 was implemented by the legislature in the early 80s, the number dropped to 215 nets in Pinellas County. There remained a little over 200 nets licensed in the county up until the net ban took effect in 1996. The average length of the gill nets in our waters was 600 yards. There were many over 1,200 yards, even though it was illegal at the time to carry an over-sized net. If you do the math you can see that on any given day it was possible to have, with legal nets alone registered in Pinellas County, over 60 miles of gill nets in the water. Add Manatee and Hillsborough Counties nets and the miles more than triple. It was almost impossible for a decent sized trout, pompano, snook, redfish, mullet, or any other edible fish to escape the daily onslaught of the nets. Luckily, many of our estuarine species are fast growing and very prolific, so when the nets were removed from the water the numbers began to increase dramatically. We still have some poachers working throughout the state, but hopefully they will be caught soon and removed from our waters.

As anglers spent more time on the water after the net ban fishing for trout, snook, and redfish, they began to notice other species of fish that they had never caught before. Most noticeable was the pompano. Pompano are in the jack family and are first cousins to permit. As a matter of fact, juvenile permit and pompano school together in many areas and are very difficult to tell apart. Our Florida regulations take that into effect and so do not allow the sale of any pompano over 20 inches. Since pompano do not generally grow over 20 inches, this eliminates the sale of permit, mis-represented as pompano. The pompano population is returning so fast that many younger anglers think that we have a new species suddenly in the Tampa Bay area. In fact, pompano were simply netted so efficiently prior to the ban that virtually no one but the commercial netters and the fish houses ever saw a pompano.

There are many ways to fish for pompano and you have a good chance of catching them if you just use some common sense and have a little knowledge about their habits. If you have a shallow draft skiff, you can find pompano schools fairly easily. Run along the beaches, close to the swash channel, on full plane and have someone watch your wake for pompano "skipping". They have a tendency to jump out of the water when frightened and skip along the surface on their side. When your observer sees this, you immediately turn around and stop the boat so you can began fishing that area. Remember that pompano are schooling fish and where you see one, there are always a lot more. You can take the "blind" approach to fishing for them like many bridge and pier anglers, and just cast your lure or bait all day until a school swims by and you hook up. If you know that pompano love sand fleas, small crabs and other mollusks, you will fish along beaches where there is an abundance of sand fleas. Bridge pilings are another great place to fish for them, where the barnacles have built up over the years and there are a lot of small crabs, shrimp and other shellfish living among the barnacle growth. (When fishing these areas, it doesnt hurt to use a shovel or hoe to scrape the barnacles off the pilings to create a great chum line. Youll be surprised at what you will attract in this manner.) Other places to hunt for pompano are around the mouths of passes, particularly those with a drop off or shell bottom near the mouth of the pass. Pass-a-Grill Pass is the prime example in our area, with a large, shallow sandy spoil outside the pass dropping off 18 feet to a hard shell bottom just inside the pass. This is an ideal spot to fish an incoming tide since the pompano and other game fish will be in the deeper water waiting for the tide to wash sand fleas, crabs, and other tasty morsels over the ledge to their waiting mouths. On the outgoing tide you can frequently find the pompano on the top of the spoils rooting around for sand fleas etc. 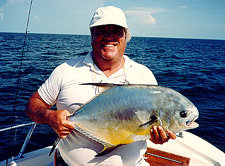 Pompano have a first cousin, or maybe a step-brother, called a permit. When the permit and pompano are juveniles, they will frequently school together. Their appearance is so similar that the state has made the size regulations the same for pompano and permit. They can be kept no less than 10 inches or more than 20 inches fork length. You are allowed to keep 10 per person per day in that size range, however, you may only keep one fish over 20 inches per day, which pretty much narrows it down to one permit per person per day since pompano are not known to get that large. They are in the true jack family and many people mistake them for jacks and throw them back. That makes me very happy since it leaves more for me, but both pompano and permit are delicious. Just to show how delicious, the fish houses pay more for pompano than for any other fin fish in the Gulf.

The right tackle for pompano is a 6 to 8 pound spinning rig. Ten pound tackle is OK, but you lose a lot of the action with the heavier rod. Several baits work for pompano, including sand fleas, (live are best but frozen will work if fresh) fiddler crabs, and bloodworms. Some of you may have another bait or two that you use, but these are the basics. Fish them on the bottom with a weight small enough to hold them down but not so big as to hinder the movement along the bottom with the current. Pompano are always moving along the beaches looking for a meal being swept along with the wave action. As for jigs, the old stand-by is a ¼ to ½ ounce yellow or white bullet-headed jig wrapped with the same color hair cut off at the bend of the hook. There are other jig patterns that will work because technique is the key when using jigs. You want to bounce the jig on the bottom so that when it falls a puff of sand pops up that looks like a crab trying to bury itself. This will trigger a strike from any hungry pompano in the area. Just be sure when using a hair type jig that you cut off the hair at the bend of the hook. Pompano are notorious short strikers. Our pompano are growing up to be two to three pounds now and they can really give you a good scrap on light tackle. Try a few of these techniques and you will soon become addicted to pompano fishing and eating broiled, stuffed, grilled, baked, or fried fresh pompano every week.