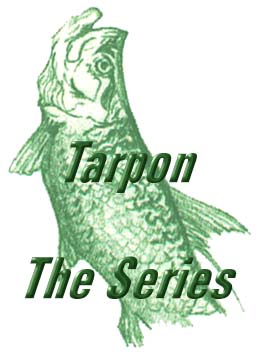 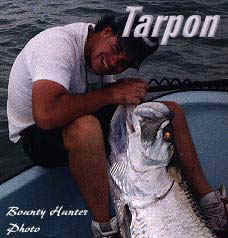 With a typical 80 - day season producing an average 5,000 tarpon landed, it's no secret that the world's best tarpon  fishing hole yields more tarpon than any one location in the world.

Where is this unsurpassed tarpon domain? Boca Grande Pass is the only conceivable answer. Located on  the Florida Suncoast at the mouth of Charlotte Harbor, Boca Grande and its surrounding reaches boast some of the best fishing in  Florida, not to mention the continental United States. Charlotte Harbor itself has the distinction of being one of the nation's largest undeveloped estuaries . Its nonchalant atmosphere is surrounded by an unspoiled serenity and world renowned fishing, particularly tarpon.

The location also has deep roots in history. From the time of about 1,000 A.D. the terrain was inhabited by the only real native of Florida, the Calusa Indians. Though the Calusa had no written language, the history we know of them comes orally from Seminole Indians, and from written accounts of Spanish explorers. From these accounts we know the Calusa were a great fishing tribe. Their entire life and religion revolved around the harvesting of the Gulf of Mexico and its interior bays. Upon the arrival of the white man in the 1600s, the Calusa Indians fended off Spanish attempts to barter and colonize their land. By the early 1700s they all but disappeared - The victims of slavery, warfare and European disease.

The place of the Calusa Indians was taken by Spanish and Cuban pilgrims. They too harvested the adjacent waters and exported much of their catch to their homelands. During the 1870s descendants of the Spanish and Cuban settlers established several fish ranches, and the area became a Mecca to a then fast growing seafood industry.

On March 12, 1885 an event happened that would revolutionize the history of the realm forever. On that date, W.H. Wood landed a 93 lb. tarpon at the mouth of the Caloosahatchee River. His fish is widely acknowledged as the first tarpon ever landed on rod and reel. Wood often shared accommodations with another wealthy outdoorsman, Chicago streetcar magnate John M. Roach. Roach was very familiar with the cachet of fishing that the area had to offer, especially the tens of thousands of tarpon that visited Boca Grande Pass annually. In 1894, the Yankee Roach bought Useppa Island. From 1894 to 1898 he built the first fish camp, " The Tarpon Inn." Roach would invite his wealthy friends from the North to visit the island and fish the virgin waters. Soon afterward the island and its surrounding waters became the new headquarters of the sportfishing world. The area took earnest when in 1908, Barren Collier bought Useppa Island from Roach and built another " Tarpon Inn " on Gasparilla Island. "Build it and they will come." Collier did, and do they ever!

The tens of thousands of tarpon that visited Boca Grande Pass during those times still come today. For those sportsman who have never witnessed this phenomenon, it is something you must experience yourself to believe.

Back in the days of Roach and Collier, the pioneer fishing guides employed a spoon drifting in the

tide behind their primitive wooden row boats. The technique proved effective until the evolvement of large keeled pass boats and the paragon live bait. For decades live bait was considered the only productive way to fish the pass. Today there is a forest fire ablaze of yesteryear. The synthetic baits are in vogue again, the jig is taking the pass by storm. In fact, jigs were responsible for a 10-to- 1 ratio in tournament wins in recent registry.

Actually jigs are nothing new to the pass. Their use in Boca has been documented periodically in pass fishing history. The drawback to jigs and tarpon was that the tarpon have an uncanny ability to throw them out of their mouths during awesome aerial displays. The heavy amount of lead needed to reach the deep depths of feeding tarpon acts as a dislodging device to the angler's hook.

In recent times, an unaccredited angler decided to utilize a highly effective jig used in Louisiana. Dubbed the " Coon Pop " after its inventor Capt. Lance " Coon " Schouest, the problem of the heavy jigs was all but eliminated. The " Coon Pop " rig consists of a weighted body which has a piece of soft copper wire molded through it. With a plastic jig tail attached, the soft copper wire is loosely wrapped around the hook. When a tarpon " goes bad " the weight is thrown from the hook, and most times the hook remains buried in the bucket mouth of the tarpon.

Unfortunately for Boca Grande jiggers, the " Coon Pop " was not heavy enough to reach the deep holes in the ripping tides of the tarpon honey hole. A whole series of homemade " Coon Pop " spin-offs rushed the pass. Until now. This year history will be made again. 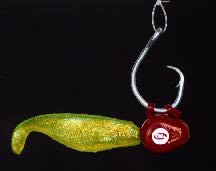 Jig guru Steve Marusak, president of Cotee Industries, has designed " The real Tarpon Jig." The 4- ounce jig features a pair of soft molded ears that are wrapped around a 13/0 circle hook. A soft body shad tail is attached to a peg situated at the rear of the head. During the fury of a wild tarpon fight, the ears release the jig head. The circle hook is notorious for escape- proof hookups on tarpon. "The Reel Tarpon Jig " boasts Cotee's " Liv' Eye " and the shad tail peg is adjustable to keep the lure drifting at a 90-degree angle to the bottom.

The standard set up is easy. A quality reel is loaded with 40 lb. test line and at least a 300 yard capacity. The line is doubled by tying a Bimini twist. An Albright knot is used to attach a 3-to-4 foot section of 100 lb. test leader. " The Reel Tarpon Jig " is connected to the leader via a loop knot. The soft ears of the lure are wrapped around the hook. A 6-foot stand-up rod is a standard tarpon tamer.

Generally speaking, the fish will be feeding on the upcurrent side of the holes and ledges that line the pass floor. Starting your drift at the top of the pack, lower " The Reel Tarpon Jig " to the bottom. Once the lure hits the bottom take a turn or two of line onto the reel. No jigging action is necessary during a moving tide and a slight lifting action gets the nod on slow or slack tides. Careful attention should be paid to your quality sonar to make important adjustments in the effort to fish as close to the bottom as possible. The secret to fishing the pass is to keep your line straight up and down. A ballooning bait will be out of the strike zone. 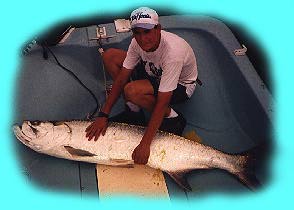 It is also advisable to make mental notes of where you mark tarpon, especially if you should record "false bottom." Tarpon often are so thick in the pass that your sonar will black out with tarpon from top to bottom. Be sure to hit those spots on your next drift. Once a bite is detected, don't jerk. Let the tarpon pull your rod tip down. As the fish begins to take drag, slowly raise the rod and the hook will set on its own.

Fishing with monofilament in the pass is tricky business. The bottom is lined with jagged coral and limestone. Always keep full pressure on your fish and stay directly over the beast. Every effort should be made to move outside the holes to insure a successful release.

There are many " rules " in fishing the pass, far too many to discuss in a short story. I highly advise novices to hire a guide prior to attempting to fish the pass from your boat. At minimum, be sure to pick up a copy of literature detailing fishing the pass at any local tackle shop. Also watching the pros from a distance is strongly encouraged.

No Boca Grande Pass story would be complete without mentioning the " hill tide ". Most years during the spring tides, millions of Calico crabs are washed out from Charlotte Harbor enroute to spawn. During this natural phenomenon, the tarpon cruise well inside the pass to an area called the hill. Anyone who gets a rush from seeing a Largemouth Bass slam a top water plug, hasn't seen anything until they've experienced giant tarpon feeding during the crab run. The crab run is difficult to predict and the only way to be sure is to be there.

My clients often enjoy pursuing tarpon in more isolated surroundings on the beach or surrounding flats using lighter tackle. However, I am always just a few miles away from the pass looking for that big gulp. You'll be sure to find me there when it turns red hot and I can't stand it no more.

Back to Gamefish Index Page