There's no reason for me to type this news release from NMFS and possibly make a mistake, so here it is in it's entirety for you to read just as I did. After you read it, continue below and I'll give you some food for thought. (If this is too difficult to read, you may see the original at:
http://caldera.sero.nmfs.gov/fishery/newsbull.200/news200.htm
and click on the May 17th bulletin - NR00-024 ) 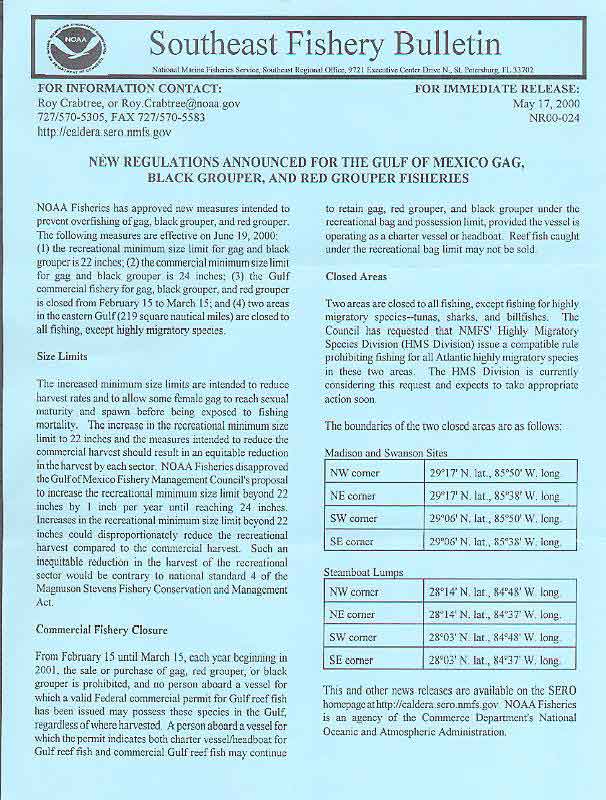 The commercial size limit of 24 inches will make no difference in the commercial take of black or gag grouper. They catch almost none under that size at this time. The majority of the small grouper that they are discarding are red grouper, and the longliners themselves estimate that they discard 20 million pounds of undersized fish in order to land the 8.9 million pounds of grouper that are currently landed each year in the Gulf of Mexico.

Read the notice again and you will see that NMFS does not lower the commercial quota at all. The Gulf commercial quota is now at 9.8 million pounds, but they have NEVER landed that many pounds of grouper. The Feb. 15th to Mar. 15th commercial closure will have little or no effect on the landings of grouper. This is only one of three or four months that they have determined that grouper spawn and the fishing pressure will simply increase in the other 11 months in order to make up the loss of one month's fishing. Also, they only close fishing for gag, black, and red grouper. There are the bigger snowy, yellowfin, yellowedge, misty, warsaw, and marbled grouper that they can still fish for. This means that they will still be destroying short and illegal fish while fishing for these species. From 1988 to 1998 the landings of these other grouper are down by an average of 61%. this would seem to indicate to me that those species are nearly gone.

As for the area closure of 219 square nautical miles; how will this closure of two small 10 x 10 mile (appx) areas be enforced. Is NMFS going to fund two USCG cutters to stay on station during the entire year? I doubt it!

If grouper are really as stressed as the biologists say and the longliners are indeed fishing on the spawning aggregates, then why does NMFS refuse to take the necessary course of action and reduce the commercial quota to a point that the grouper can sustain rather than paying lip service to it and again putting the onus of conservation on the backs of the recreational fisherman.

Man and fish catching technology have far surpassed nature's ability to reproduce and if the difficult decisions are not made and carried out soon, grouper in the Gulf of Mexico may go the way of the buffalo; seldom seen and seldom eaten.......................