How Should They Affect Your Fishing?

Since ancient times, man has gazed skyward in wonderment - transfixed by the two celestial bodies most

apparent from the earth's surface: the sun and the moon. Small wonder that many gods worshipped by ancient man were based on these strange moving balls of light. As time passed, the most inquisitive and learned minds of the day began to realize a correlation between various natural events and the position of the sun and moon. Many early solar calendars were astonishingly accurate, and to this day a sundial will tell you the time of day. Man today knows a great deal more about lunar and solar events and their effect on nature - but the timeless fascination remains. We as sportsmen can use some basic knowledge about moon cycles and phases to better our chances for fishing success - or to plan the perfect angling vacation.

This article, and the companion story Solunar Periods: How Should They Affect Your Fishing? are intended to give you a general overview at two events that have been occurring on Earth since day 1: Changes in moon phases and major/minor solunar periods. We'll try to present the information as it relates to what we love to do: fish. Much of what we present here is based on the firsthand observations of a lifelong outdoorsman who firmly believes in using solunar data to help his clients catch more and bigger fish: Capt. Robert McCue of New Port Richey, Florida. Capt. McCue is a student of natural events and how they influence fish behavior - not only feeding patterns but fish movements and spawning cycles as well. He believes that understanding how a fish adapts to changes in its environment allows an angler to better predict where his quarry is likely to be and when it will be eating. If you're only able to get out on the water once or twice a month, mark well what McCue has to tell us - you'll know how to pick and choose your days wisely or know what time is likely to be most productive on any given day. Bottom line is: this is time-tested advice from a fella whose living depends upon his ability to find and catch fish. It's also advice from a professional at the top of his field. 'Nuf said? Sharpen those pencils and let's get started with a little Earth Physics 101, shall we?

Most fishermen check the tides before they head out - you want to fish the moving tide, of course. Good 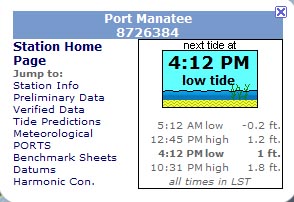 strategy, but how can you tell how strong(high or low) that tide's going to be? To answer that question, it's important to remember what causes tides in the first place. The gravitational pull of the moon against some part of the earth is present all of the time. Since water is more moveable than the ground, it is lifted toward the moon (up) and actually forms a bulge of water in the ocean. That bulge moves with the rotation of the earth on its axis, eventually striking a land mass as a "high tide". The earth continues to rotate and the moon continues its orbit - pulling the bulge of water along with them. Movement is from east to west and south to north in the northern hemisphere. When the bulge of water moves on, the water left behind is referred to as the "low tide". How high the high tide is and how low the low tide is largely determined by... you guessed it, the moon and sun. When the earth, moon and sun are in alignment with one another, the gravitational pull is strongest, therefore that bulge of water will be very high with a resultant higher than normal tide. Question now arises - why on earth should I care? Easy answer - the fisherman should care because nature cares. I'll tell a quick story to illustrate my point while you digest what we've learned so far. 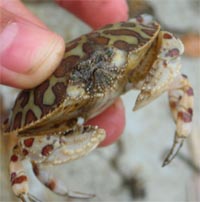 On the southwest Florida coastline, there is a place called Boca Grande Pass, which enjoys legendary status among Tarpon fishermen for producing some really giant fish. There is a particular species of crab which lives along the shoreline of the pass, rarely straying very far into the water. Part of its life cycle, though, requires that it be swept out to sea en masse in order to spawn. A particularly powerful tide in early summer washes the crabs off the "hill" and into the pass - where the tarpon are stacked like cord wood awaiting an easy meal. The Boca Grande "hill tide" has produced a lot of big fish over the years, and many anglers plan their vacations to coincide with this natural phenomenon. The crabs are there because of the high tide, the fish are there because of the crabs and if you're a tarpon fishermen, isn't it preferable to be where the tarpon are? I thought so.

We turn back to Capt McCue for a look at moon phases and how we can predict tidal patterns. "The moon follows basically a thirty day cycle during which certain parts of the moon are visible from earth. The angle at which the sun's light strikes the moon determines which part of it we see on earth. This is in direct correlation to the alignment of the sun, moon and earth - which determines the strength of the tide." So during either the full or the new moon, the earth, moon and sun are in alignment - gravitational pull is strong and tides are higher. The height of the high tide begins to decrease after the full moon, reaching their lowest levels during the time of the first quarter moon. They begin to increase again and reach their peak at the new moon - remember, earth, sun and moon are aligned, but the positions have changed. McCue explains: "During the new moon, the earth moves between the moon and the sun. Tides are strong here. During the quarter moon, though, the moon is at right angles to the earth - gravity is at its weakest, so the tides will be weaker." Those strong tides produce more water movement and consequently a better shot at fishing success.

All right, we know that a strong tide is a good fishing tide, but what effect does the moon have as it tracks across the sky each day and night? Remember, just because we can't see the moon doesn't diminish its influence. "The strongest tides will happen during the time when the moon is either directly overhead - what's referred to as moon over, or directly behind your position on the earth - moon under." Capt. McCue states. How do we know when the moon is behind us? Check the time of moonrise. Since the moon's orbit takes about 24 hours, it will be directly overhead approximately 6 hours after it rises and directly behind you 18 hours after moonrise. As you might imagine, a full or new moon at its crest during a high tide means one heck of a high tide's on the way. If a major solunar period (see related article) lines up with one or both of these events, put down the pencil and pick up the rod - you need to be fishing. Watch the moon carefully if you happen to be night fishing. McCue explains, "I've found that from about one hour before moonrise until just after the moon becomes fully visible over the horizon to be a very productive time. When the moon nears the western horizon, too, the action often picks up."

There are other factors that affect tidal strength. In spring and summer, for instance, the sun is directly overhead in the northern hemisphere - gravitational pull is stronger with the result that high tides are higher and low tides are higher. This is the time of the aforementioned hill tide phenomenon at Boca Grande. Autumn brings a time when the sun strikes the northern hemisphere at more of an angle - since we are tilted slightly away from the sun. Tidal flow is not nearly so strong now. Other factors come into play such as the presence of large land masses. Areas with tidal areas near large areas of land may have a reduced tidal effect since the land is not acted upon by the gravitational pull. "Two tide days" are frequent occurrences in these type regions. Capt. McCue's observations have shown him that fish and other animals are definitely affected by tidal patterns. Snook, for instance, will not spawn during the quarter moon - their eggs must be swept far offshore to hatch, then be swept back inshore 24-36 hours later as larvae. Adult snook wait until the full or new moon to spawn - this to take advantage of the stronger tidal action. Capt. McCue also reports, "Pompano become very active along the beaches during major tides - the powerful surge washes sand fleas out of the sand and into the surf - and pompano just love sand fleas."

Well I hope you picked up a few tidbits yourself from reading this - too many folks just head out to fish without knowing what nature's doing around them. You can bet those fish you're after know exactly what's happening out there - and the more you understand about how they live and what makes them do what they do, the better fishermen you'll be. No, there's no absolutes - everybody gets struck out sometime no matter what the tide, moon phase or solunar period. Start noticing what time you catch a lot of fish and what the conditions were at the time. Watch, learn and above all...remember.

editors note: We have used John Alden Knight's Solunar Tables for many decades, a great resource for any outdoorsman. 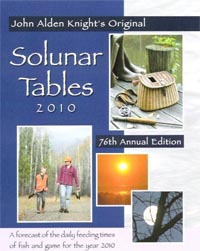