Here's a little flight of fancy for you dyed-in-the-wool bass fishermen out there: Wouldn't it be great if there was a fish that had a largemouth's mean disposition, a smallmouth's strength, was faster than both and grew about four times as large? By the way, did I mention that it loves to hang out around structure like bass, can be caught from shore and is absolutely delicious? Far from being simply a daydream, I've just described one of our most popular gamefish: the Snook. Snook are found throughout tropical waters, and are easily identified by a distinctive narrow black stripe running along each side of the body. Those of you that fish in the Northeast would recognize this marking as being similar to that found on a haddock. Unlike haddock, though, Snook are residents of inshore waters and are a popular quarry of locals and visitors alike. These battlers reach weights of over fifty pounds, but thirty is considered bragging size. Since tighter bag and size limits were enacted several years ago, Snook populations have steadily increased in the Tampa Bay area. Small to medium size Snook are present in great numbers, and are favorites of light-tackle and flyrod anglers.

Snook regulations are a little complicated, so be sure to check the rules before you go. Successful methods for locating 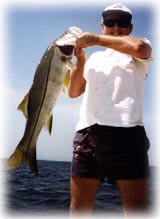 Snook vary according to the time of year. Though they are seldom found very far from shore, Snook move a great deal about inland waterways. Snook have even been documented in nearly pure freshwater in some areas, being extremely tolerant of low salinity levels. During winter, Snook are found far inland among the mangrove thickets and tiny coastal creeks. They are very sluggish due to the cold water, and are sometimes killed by abnormally cold spells. As the water warms, the fish become more active and hungry, prowling the edges of the mangrove roots and oyster bars in search of food. Snook may take up residence beneath any dock, floating platform, tree or log they happen to pass - during the spring, work these areas of structure carefully. Bass fishermen, take note - Snook like the same type places in salt water that largemouth like in freshwater. Indeed, in brackish-water areas, it's common to catch a bass on one cast and a Snook on the next. Spring rapidly turns to summer on the Suncoast, and the coming of longer days signals the Snook to head for the passes - areas where Gulf waters flow into inshore areas. Anglers fish the tide around pilings, under lights at night and around bridge fenders with live bait and heavy tackle. When a Snook hits in these areas, he will likely head for the nearest structure. Stop him before he gets there, or he will certainly cut your line on the barnacles. Watch carefully under lights near the water - Snook will lie in wait just outside the pool of light cast on the surface. Drop a bait at the light's edge - and hold on tight. Walking or boating along the beach can also be productive during the summer. Snook will travel along the beach in swash channels - areas of slightly deeper water formed by wave action- and are sometimes found in only a foot or so of water. Look carefully - beach Snook are nearly the same color as the sand. They are very wary here, so a delicate presentation and stealthy approach will pay dividends. Snook on the beach are a favorite of light-tackle enthusiasts, since there are usually no barnacle-encrusted pilings or oyster bars to play havoc with your line. Keep your drag in tip-top shape, and tie a good knot - long fights are not uncommon when dealing with strong beach-run Snook. Areas of pilings or logs along the beach are very likely to hold

Snook, since they provide shelter and security - not to mention shade from the noontime sun.

The approach of fall causes the process to reverse, until the last of the Snook enter their inland winter quarters. Knowing the fishes' location during the year is often vital to success, as is a knowledge of the currently "hot" bait. Many baits are used, and include: pinfish, sardines, pigfish, shrimp and a variety of artificials. Snook can sometimes turn finicky, and refuse all but a certain bait or lure color.

My recommendation to the visiting fishermen or to locals unfamiliar with Snook habitats is simple: hire a guide. Many of the finest Snook guides in the world base out of the Tampa Bay area, and the knowledge to be gained from fishing with an expert is often well worth the expense involved. Drawing on your guide's experience can make you a better fisherman, and sometimes means the difference between getting skunked and enjoying an unforgettable day of fishing the Suncoast waters. Until next time - get out and catch 'em -keep what you can use, release the rest and remember to save some for me. The bag and size limit changes occasionally, so be sure to check them before you go fishing (click here)

ed.note: The freeze of winter 2010 has probably ruined our snook fishing for several years, so if you catch them, we suggest careful release so they can help repopulate the area.