When asked to describe the fighting characteristics of the amberjack, a crusty old veteran offshore fisherman was heard to remark "Find out for yourself – hook your line to a locomotive and let ‘er take off. Just make sure it’s a really big, really fast locomotive."

It’s been said that a lifetime of battling amberjack will lengthen your arms by several inches. Like most fishing tales, there’s no scientific evidence to back this up, but a day of wrestling these offshore brawlers will definitely leave your shoulder joints crying uncle.

The greater amberjack, or AJ as it’s often called, is a give-no-quarter, rock ‘em, sock ‘em battler that will try to wrench your hands from your arms, your arms from your shoulders, your shoulders from the rest of you and the rest of you from the boat. On top of this fighting style, the AJ gets B-I-G. Okay, all you barbell boys and girls, put down the protein shakes and pick up a rod – you’re in for a tussle.

Couple of qualifiers on the AJ: They’re big, strong fish that live pretty far offshore and grow well over a hundred pounds. In short, don’t chase these critters unless you’re in pretty good physical condition and can handle a fairly long boat ride. The suncoast is blessed with a plethora of species that Grandma and the kids can have fun catching – the AJ is not one of them. Certainly there are exceptions, but by and large amberjack are not a good "family trip" fishing quarry. Now that the negatives are out of the way, let’s get busy catching a few of these brutes.

First of all, let’s tackle an identity crisis: the greater amberjack, lesser amberjack and banded rudderfish are all very similar fish. It’s important to know the difference due to the relatively large minimum size for greater amberjack: 28 inches fork length. The lesser AJ has a slightly deeper body and proportionately larger eye than his bigger cousin. If your "amberjack" has tips of white on his tail fin, chances are you’ve got a banded rudderfish. It’s tough to tell these three apart, and unless you’re really sure of the species identification, the best rule may be to throw back any specimen under 28 inches in length.

If you’re out to take on the AJ, the first piece of equipment you’ll need is a pretty big boat. While small AJ’s and rudderfish are commonly taken from as little as thirty feet of water, the big boys live farther out. Most serious amberjack fishermen generally run to wrecks and rockpiles in at least fifty-foot depths before dropping their lines. For suncoast anglers, this means about a fifteen to twenty mile run into the Gulf. The legendary stretch of Gulf bottom known as the middlegrounds is prime AJ country, but the eighty – plus mile run puts it out of reach of most anglers. Many anglers will book a trip onboard a party boat and venture on an overnight adventure to this angling Nirvana. While not for the faint of heart or weak of stomach, this trip provides the potential for some serious tackle – busting action, and the price tag (about $125 – 150) is not terribly steep.

AJ’s are creatures of structure and the many wrecks and rockpiles dotting the Gulf bottom are welcome havens for the big jacks. AJ’s will weave in, out and around the structure, constantly searching for food. They usually travel in small groups, so if you hook one, chances are there’s more of them about. When they’re in a feeding mood, AJ’s aren’t real picky about their diet – they love cut fish, squid or even crabs. A big live fish is an old standby, and is generally the bait of choice. 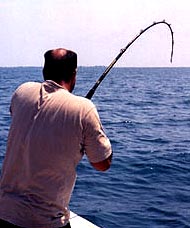 When gearing up for AJ’s, leave the light stuff at home – this is the realm of forty – pound class tackle and up. If you get into the really big ‘uns, you’ll hook one that just doesn’t stop no matter how hard you pull back. Greater amberjack reach weights of 150 pounds and up – a fish of this size will scrap just about any tackle you can wave at it. Sixty-pound line and hundred pound leader is a good choice for small to medium AJ’s, but if the big boys are lurking around, you’ll need eighty pound gear…and the back muscles to use it. While reel drags need to be smooth, they need to be set tight – the first place Mr. AJ is gonna head is back to the safety of his shipwreck. You need to stop him before he gets there.

Amberjack fillets usually end up in restaurants in one of two forms: fried or grilled on a sandwich called a "Gulf tuna", or smoked, ground, mashed and seasoned into the heavenly concoction known as smoked fish spread. Amberjack has a stronger flavor than flounder, grouper or snapper, which is why it is often smoked. It is, however, delicious fried or grilled as well. One good – sized AJ will keep you in fish for awhile.

A final thought: the commercial amberjack industry has come under a great deal of scrutiny recently, due to what has been reported as a decline in amberjack stocks. Without engaging in this debate, it is important that every angler observe game laws and only keep those fish he / she is going to use as food. The fish of the Gulf of Mexico are a precious natural resource, and are well deserving of our respect and conservation.

That’s it for the amberjack. He’s big, he’s mean and he’ll put a whuppin’ on you. If you win the battle, though, that first bite at the dinner table will make you forget about how much you hurt.