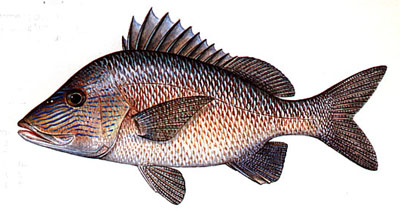 The white grunt (Haemulon plumieri); also known as "grunt", "pigfish" and, if you’re a grouper fisherman - "oh jeez, not another *%*&$# grunt". This smallish denizen of the Gulf rockpiles doesn’t get much respect from fishermen intent on wrestling grouper and snapper from their favorite holes. Those anglers who’ve taken a few larger specimens home for dinner, though, know the white grunt as one of the suncoast’s most underrated table fish.

White grunts are schooling fish, generally congregating around structure of one sort or another. They are especially fond of "live rock" bottom, with its characteristic growth of soft corals and algae. Many offshore Captains even refer to this type of structure as "grunt bottom" when it appears on their sonar. Grunts will roam throughout their territory, always on the alert for an easy meal. They eat small fish, shrimps and crabs of various types. Grunts are not heavyweights: a 15-inch specimen (which qualifies as a nice fish) will probably weigh about 1 ½ pounds.

Very few offshore anglers target grunts, rather they are generally caught while seeking the more glamorous grouper and snapper. For this reason, a grunt seldom gets a chance to display its fighting skills against light tackle. Most grunts get winched up from the bottom with 40 – 60 pound tackle – hardly a fair fight. Any fisherman that has hooked a grunt on light tackle can attest that these pee-wees of the piscine world put up quite a dogged fight when pitted against light line.

If the grouper aren’t biting and you just want to catch a few fillets for supper, simply scale your terminal tackle back a tad – anywhere from a #1 to a 3/0 hook will work. Grunts will occasionally get spooky, so you might have to drop down to 30-pound leader. The camouflage lines seem to really disappear underwater, and they don’t cost big bucks like the fluorocarbon leaders do.

Every rockpile seems to hold some grunts, and they’re generally more than cooperative about eating any cut bait you toss ‘em (sometimes they can be a downright nuisance when you know there’s grouper about!). For this reason, grunts are a perfect fish for the impatient kids and Uncle Stu from Racine who just wants to catch "something." When ole Uncle Stu cranks up a big (say 12 inch plus) grunt, though, do your palate a favor and toss him in the cooler – the fish, not Uncle Stu. The palm – size fillets you’ll get off that fish are wonderfully sweet and delicious, especially when deep-fried with hushpuppies, cheese grits and homemade coleslaw on the side.

The white grunt is one of those species that is still present in abundance in the Gulf, and makes for a fun day of fishing. If you take a trip on a party or "head" boat, especially of the half – day variety, you can expect to catch plenty of grunts. Keep only the big ones – the small ones are the dickens to fillet – and enjoy!