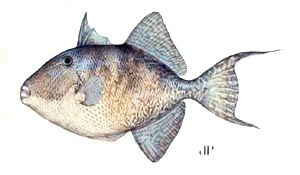 Trigger fish are abundant in the Gulf of Mexico and thank goodness, not everyone is aware of how good they taste or what fun they are to catch. There are two trigger fish that are common in Florida’s waters, the queen trigger and the gray trigger. Ours in the middle and upper Gulf is the gray trigger. They can be found year round in our area and they live on just about any rocky or coral encrusted bottom. Their diet consists of crabs, shrimp, sea urchins, and mollusks. They get their name from the dorsal fins. Unlike most fish, the trigger has only three stiff dorsal spines and they can lock them in an upright position. The only way to get them down is to push down on the third spine. It acts as a "trigger" and the other two spines will flatten into a groove in the fishes back.

It’s really fun to watch triggers feeding while you are diving. Just sit down and break up an urchin or two and watch the action. They are really amazing creatures with teeth that can crack open a crab shell as if it weren’t there. Their eyes are set far back from the mouth so they can get between the spines of an urchin with impunity. The skin of a trigger fish is just like that of the file fish. I’ve been told that it was used as sandpaper in colonial days. I can tell you the if you try to fillet a trigger fish like you do other fish, you will dull your knife before you can clean one fish unless you know the technique of cleaning them from the inside out. The meat of a trigger is white, mild, and tastes like lobster when it is prepared properly.

The second best thing about trigger fish is that they are great fun to catch. They turn sideways and fight all the way into the boat, and because of their flat, round shape, they fight as hard as a fish twice their size. They continue being ticked off even while you are removing the hook. If you get your fingers too close to the mouth, you will lose a nice chunk of your own meat.  The best bait is a piece of squid hooked on a very sharp 1/0 or 2/0 hook.  Use light tackle and you'll really have a battle even with the smaller triggers.  Rig just like you do for grouper using a "fish finder" rig but scale down the size of the weight accordingly.  You'll need to get your bait to the bottom and then reel in enough line to keep the baited hook suspended just above the bottom.  If you veerry slooowlly raise your rod tip the bait will stay directly below your lead and you'll have a better chance of feeling the bites.  when you feel a nibble, try to jerk his lips off cause the inside of his mouth is very bony and hard to penetrate.

I suggest that you don’t keep any more than you plan to eat immediately. Unfortunately there is a commercial market for them and if we don’t practice good conservation now, they can become as scarce as many other species have due to over-fishing.